New Washington State Rideshare Regulations: What You Need to Know 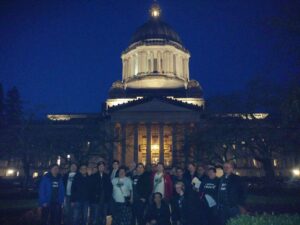 On March 31, 2022, Governor Jay Inslee signed into law House Bill 2076 which establishes a series of statewide rideshare regulations in Washington State.  Most importantly it set a statewide minimum earning standard, but also creates a Paid Sick Time system, forces the rideshare companies to pay into the state workers compensation system, funds a Driver Resource Center for dispute resolution, and sets up a government study of whether and how the rideshare companies should pay into unemployment insurance and Washington’s Paid Family and Medical Leave system. In this post we will cover some of the basic details of each of these new regulations and how all of them might affect your rideshare business.

Let’s start with the new minimum earning standard set in this law.  Beginning on December 31, 2022, the law specifically sets pay rates for rideshare drivers at $0.34 per minute and $1.17 per mile with a minimum payment of $3.00, except for rides originating in the City of Seattle where the pay rates will be $0.59 per minute and $1.38 per mile with a minimum payment of $5.17. These rates represent no change to earnings for rides in Seattle but could be an increase in earnings of nearly double in other parts of Washington State. Does this mean you will earn more? Obviously, it depends on where your drive and how the rideshare companies respond to these new rates.  If you are primarily providing rides in the City of Seattle, you will see little change.  However, in other areas where there is a large pay increase, we expect those costs for the companies will be passed on to riders which as we’ve seen in Seattle has significantly reduced demand and could be lost opportunity for drivers.

The next two major items, Paid Sick Time, and Workers Compensation, take effect on January 1, 2023.  Both items are completely paid for by the rideshare companies and every driver will have access to them.  Paid Sick Time begins to accrue at a rate of one hour per 40 hours of on trip time. Drivers who have worked more than 90 hours of on trip time are eligible to request Paid Sick Time.  Payment amounts will be based on the drivers Average Hourly Compensation during on trip time, excluding tips, calculated over the 365 days prior to the use of Paid Sick Time.  If you are hurt while on the job, beginning on January 1, 2023, you will be able to file a workers compensation claim with the Department of Labor and Industry.  Both new regulations are positive for drivers not losing income because you’re sick or must take care of sick loved one is fantastic. As is having access to workers compensation if you are hurt while driving for a rideshare company.  However, the question remains will the companies pass on these costs to riders, increasing prices, and possibly lowering demand.

The creation of the Driver Resource Center is a little more controversial as it is funded by a $0.15 per trip tax on riders and the only organization eligible to run the center is the Teamsters.  This means that if you have a dispute with a rideshare company about a deactivation you will only be able to get assistance with that dispute through the Union.  This part of the new law is a $10+ million taxpayer giveaway to the Teamsters, who will use this money to promote unionization and try to take your independence away.

The final piece of the law is the study into whether and how the rideshare companies should pay into unemployment insurance and Paid Medical and Family Leave system in Washington.  A major piece of this study would be to determine when a driver would be eligible to collect benefits under these systems.  For example, when is a driver considered to have left their rideshare work? There are many cases where a driver takes a long break from driving to work another job or to travel to a home country, have they quit? Are they laid off? Can they claim unemployment benefits?  These are all things this study will investigate. The report is due to the legislature by December 2022.

As you can see there are many new things coming to rideshare in Washington state, all seem to be positive for drivers. However, as we’ve seen in Seattle since the passage of the City’s Fare Share law, all these new costs to the rideshare companies can add up to much higher fares for riders.  With ridership already down due to Covid fears, what further negative impact will higher prices have on demand for our services?  Only time will tell, and we will keep monitoring this issue.